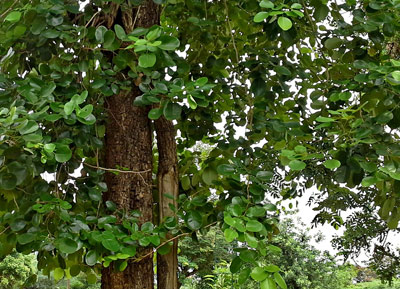 Pterocarpus santalinus, with the common names red sanders, red sandalwood, and saunderswood, is a species of Pterocarpus endemic to the southern Eastern Ghats mountain range of South India. This tree is valued for the rich red color of its wood. The wood is not aromatic. The tree is not to be confused with the aromatic Santalum sandalwood trees that grow natively in South India.

Pterocarpus santalinus is a light-demanding small tree, growing to 8 metres (26 ft) tall with a trunk 50–150 cm diameter. It is fast-growing when young, reaching 5 metres (16 ft) tall in three years, even on degraded soils. It is not frost tolerant, being killed by temperatures of −1 °C.

The leaves are alternate, 3–9 cm long, trifoliate with three leaflets.

The flowers are produced in short racemes. The fruit is a pod 6–9 cm long containing one or two seeds.

Uses of its Timber

The wood has historically been valued in China, particularly during the Qing Dynasty periods, and is referred to in Chinese as zitan and spelt tzu-t'an by earlier western authors such as Gustav Ecke, who introduced classical Chinese hardwood furniture to the west. An exquisite chair made of red sandalwood can be seen today in China's Forbidden City in Beijing, inside the Hall of Supreme Harmony, and once used by the emperors of the Qing Dynasty.

Due to its slow growth and rarity, furniture made from zitan is difficult to find and can be expensive. It has been one of the most prized woods for millennia.

In India sandalwood is one main and lucrative market for smugglers, as a high price is paid for this wood in China. Since the exporting of sandalwood is illegal in India, the underground market is growing and there are a number of arrests every year of those trying to smuggle this wood to China.

The other form of zitan is from the species Dalbergia luovelii, Dalbergia maritima, and Dalbergia normandi, all similar species named in trade as bois de rose or violet rosewood which when cut are bright crimson purple changing to dark purple again. It has a fragrant scent when worked.

Red sandalwood has been used for making the bridge and also the neck of the Japanese musical instrument Shamisen.

For more details on this Product. Please Contact us